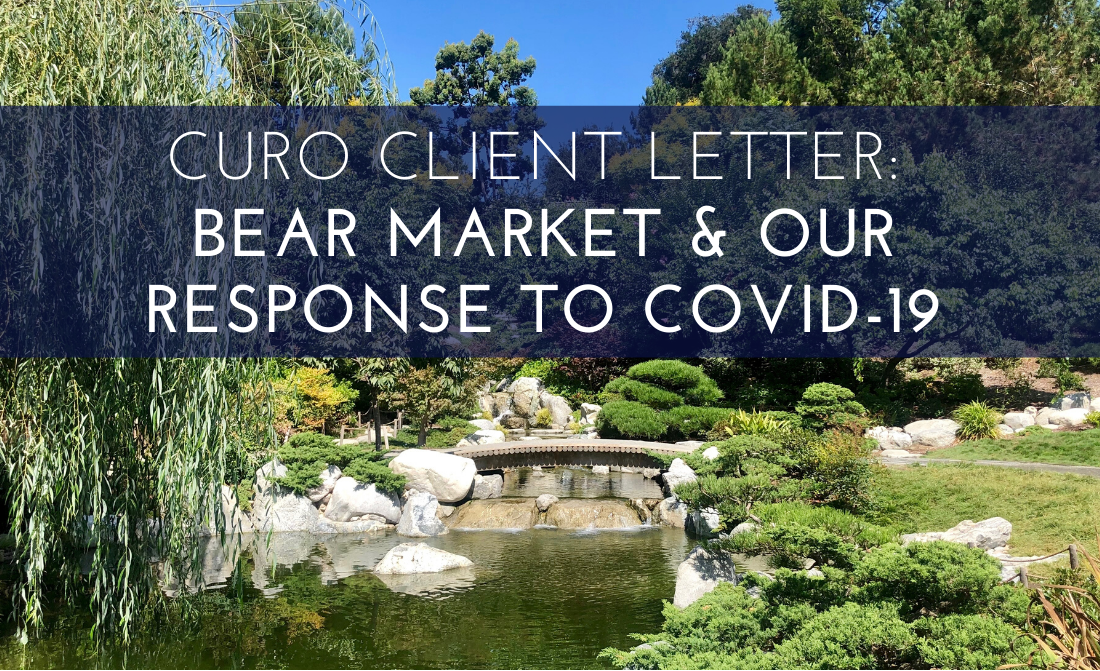 Part of our communication protocol is to reach out to you when the stock markets enter bear market status - down more than 20% at closing from a previously established high. We did that near the end of last week on both the Dow Jones Industrial Average and the S&P500.  You will note that we sent a similar communication when we entered correction territory (down 10%) on February 28th. The S&P500 needed only 16 days to go from a new all-time high, on February 19th, to a bear market, resetting the previous record of 28 days.

You may be wondering why it’s called a bear market.  The term bear market gets its name from the way a bear attacks its prey, swiping its paws downward. Similarly, the bull market, an upward trending market with an absence of a 20% decline, gets its name from the way a bull attacks, thrusting its horns into the air. The present bear market brought to an end the longest bull market in history at just over 11 years, almost to the day.  And here’s the kicker...both bull and bear markets are arbitrary, made-up numbers to fit nicely in a box so we can understand them. To me, the decline we experienced from September to December of 2018, down 19.8%, sure felt like a bear market, although it did not technically qualify.  And, neither did April to December of 2011, when the equity markets fell 19.4%.   At this point, the definitions are irrelevant. The fact is the markets are down and so are our accounts.

At times like these, the news can become addictive and filled with almost exclusively negative headlines.  The media purposely uses words that trigger the fight or flight response to keep us watching.  So far, the largest single-day decline was on Thursday, March 12th.  On that day, I personally saw headlines that included the words: obliterate, spooks, crater, plunge, and scary.  On up days, they use words such as soar, surge and rally.  See what I mean?  As a matter of fact, on my visit to the New York Stock Exchange last October, I noticed credentialed media roaming the floor with cameras in a search to capture human emotion.  These are the photographs we see on the nightly news, in the morning papers and in outlets in between.

Fear, as a core human emotion, is magnified when situations arise quickly and unexpectedly.  It has been the speed and unexpectedness that has driven the outsized reaction from the markets.  We must remain aware of the negative headlines and the subsequent sudden urges that may follow causing us to abandon our plan.  It is important to note that the best and worst days often occur within days of each other.  For example, last Thursday’s precipitous move to the downside was followed on Friday with the best day the SP500 and the DOW have experienced in 12 years.1  The below chart is the most up-to-date graph I have that illustrates this point.


The great news is that the U.S. economy was healthy before this three-week stretch of declines began with unemployment rates near 50-year lows, solid job and wage gains, corporate profits poised to accelerate and low interest rates.  This bodes well for a faster recovery on the other side.  Like someone who gets sick, the healthier you are going into it, the faster you tend to recuperate.

Historically speaking, or statistically, as of Thursday, March 12th, we were getting ever closer, within seven percent, to the average bear market decline felt since World War II of about 35%.1  I would have you receive this communication as my own increasing optimism.  This optimism is simply a restatement of three of my career-long investment observations: (1) as prices decline, value increases; (2) waiting for clear evidence of a market bottom ensures that you have already missed it; and (3) when a recovery begins its trajectory, it tends to mirror that of the previous decline’s velocity.  These are historical observations, not predictions.

Based on the previously mentioned observations, my conviction remains that this time is no different.  The volatility that we have experienced is part of the stock market’s process to find a bottom, consolidate itself, and move forward again.  This doesn’t mean that stocks can’t go lower.  It just means the opportunity for long-term investors is attractive.  I am reminded of Warren Buffett’s teacher, Benjamin Graham, and his quote, “In the short-run, the market is a voting machine, but in the long-run, it is a weighing machine.”  Times like these are when we can pursue potential buying opportunities in some of the best companies in the world.  We need to stay the course; this too shall pass.

In closing, our office remains open and prepared to continue to serve you.  We have a Business Continuity Plan in place that is tested annually, and we have been structured for years now with the ability to work remotely with no interruption to our Client experience.  Additionally, as you know, we periodically use Zoom video conferencing technology to conduct Client meetings and expect we will use this even more in the near future.

I have full conviction that we are following the right path and am always here when you need me. Thank you for your continued confidence, and for allowing us to help you in the pursuit of your financial goals.